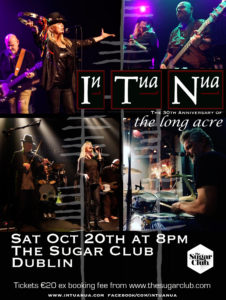 On Saturday October 20th, In Tua Nua are uniting to celebrate 30 years since the release of ‘The Long Acre’, the album that, along with with a slew of hit singles including ‘All I Wanted’, ‘Seven into the Sea’, ‘Somebody to Love’, and ‘Don’t Fear Me Now’, made In Tua Nua one of Ireland’s most iconic bands of the 1980s.

Released on Virgin Records in 1988, ‘The Long Acre’ became a huge US college radio hit, remaining in the charts for six months and paving the way for a 28 date North American tour.

By this point, the band were well established as one of Ireland’s premier live acts, having already supported Bob Dylan at Slane Castle and U2 on the European leg of their Joshua Tree Tour and going on to share the stage with, Fleetwood Mac, Simple Minds and Eurythmics, among many others.

Since then, the band have reunited on various occasions, notably for a string of gigs in 2004, Electric Picnic 2012, and touring again in 2017 to celebrate the 30th anniversary of their time spent on the Joshua Tree Tour.

When not playing together, the band members are still prolific in Irish music. Lead singer Leslie Dowdall has released two albums, claiming a smash hit with single ‘Wonderful Thing’.

Drummer and singer Paul Byrne released his critically acclaimed ‘Cruel and Tender Ways’ in 2014, while also playing with The Drays, The Unelectables and The Guilty Party. When not playing, Paul also organises and curates the ‘A Night For’ concert series for Pieta House and Aware at the Olympia Theatre and The Howth Jazz and Blues Festival.

Bassist Jack Dublin has experienced international success with the studio project Audiokiss, most recently charting in the US digital charts with single ‘I Don’t Wanna Say.’

Audiences can expect to hear songs from ‘The Long Acre’ alongside some of the bands most well-known hits. 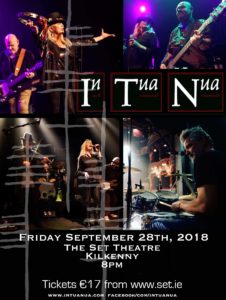 We are thrilled to announce that we are back at The Olympia Theatre again for another big charity show, this time in aid of AWARE.

This will be our fourth big charity night in five years celebrating Irish music through the decades. ‘A Night for Aware’ will feature ten music acts including Christy Dignam, Mal Tuohy & JP Dalton (The Riptide Movement), Mundy, The Pale, Cry Monster Cry, BARQ, Trouble Pilgrims, Gem Mitchell, The Skatuesques and of course ourselves.

All proceeds from the night will go to Aware and help fund their free of charge education and support services for people affected by depression.

Check out our singing drummer Paul Byrne’s new single ‘I’ve Got You’ available on iTunes and all good download stores.

The In Tua Nua albums ‘Vaudeville’ and ‘The Long Acre’ are finally available on iTunes… with bonus tracks too!!!

We had a great time in Stradbally Hall playing at Electric Picnic. Check out our acoustic session backstage on 2FM.
http://www.youtube.com/watch?v=5Kd7j5pDMxQ&feature=share&list=UUz73wVsT1lUao8wnsGP9iTw

In the old days we needed a fan club to keep in touch with everyone, now we have the web and we intend to use it!